“the long and winding road”

At some point, I’m assuming we will all probably question our abilities on whether or not to continue to do a variety of activities, such as driving.  I have not heard however from anyone, without at least a little bit of coaxing that it was time to stop driving.

I have always disliked being a passenger in anyone’s car. I usually did all of the driving whenever mom and I or mom, me and the kids would go anywhere.  So eventually I was not a passenger  with her at all, she was doing very little driving and the driving she did do was just local around town errands., which took place typically while I was at work.

Barbara (my older sister) would occasionally do errands with mom but she started saying things to me like “I’m only going to go with her if I can drive”  or  “ she scares me”  and  “ when was the last time you drove with her?”  I just figured it was Barbara’s lack of wanting to be a passenger as well, so to humor my sister I would occasionally go somewhere around town and have mom drive, and it WAS a little scary, but I kept thinking it just wasn’t that bad.   I always worried about her driving though and it was definitely starting to make me nervous.

Rob (one of my older brothers) came to stay with us for a bit.

At the beginning he did not have a driver’s license and mom had to drive him or he would need to wait for me to drive him to wherever he needed to go.  He started saying similar things that Barbara had been saying and again, I didn’t want to deal with it.   I knew what was coming,  and  it was getting to the point where moms reaction time was so slow and her peripheral vision must have been of f a bit because she was hitting curbs and it was damaging the car.   Rob showed me the damage she was doing to her car.

In hindsight, I wonder if I just didn’t want the responsibility of having to get her where she needed or wanted to be.  Or was I also in denial that her driving had gotten so bad or that she had gotten too old to drive.

Moms license was about to expire so I thought we would get serious about the “stop driving ” conversation but……. I didn’t want to and I certainly didn’t want to do it alone.   I  had been mentioning it to her periodically,  and I added that all of us were getting worried and she needs to start preparing herself for non-driving.

She would usually say something, like “why? is my driving really that bad?” but basically she would  ignore  me.

At one point Barbara, Rob and I all talked to her about giving up driving.  My children did as well.

But still when Rob went in for his license I brought mom in too so that she could renew hers.  No driving test, no written portion, nothing, just a new photo and that was it.   She needed an I.D. anyway so I figured it was good.

Rob had started working ridiculous hours, like 4 am to 7 or 8 am, so mom told him to use her car since none of us wanted to drive him at that ungodly hour.  Well that was working out well; he was doing errands with her car and taking her instead of her driving, so I worried very little.  However she was adamant about still driving.

And one day as she was going out the door, he asked her where she was going and I forget now what she said but he said “no, no, no you are not”!  She was not happy with him at all.

Finally I had to insist that she stop driving, I did tell her it was all of us that felt this way, (all of us included my kids and moms kids) and that we would make sure she got to wherever she needed to go.  It was by far one of the hardest things that mom and I have shared so far, we both knew more than we let on. We both knew this was for the best.

I was a very difficult moment and I could see the sadness on her face so I had to acknowledge what she must have been feeling and I let her know that it must be very difficult but that we all loved her and didn’t want to have her hurt herself or anyone else.

I wont forget that look; I think she knew then that she was getting old and dependent.

The women who use to drive me wherever I wanted to go and who taught me to drive was now going to be dependent on me for her transportation.

That was a sad realization for me as well; sad for her and for me because  I also realized mom was old and dependent.

We have since transitioned into a different way now, Rob is no longer staying with us , mom is no longer driving ,  but the funny part is that she always says that she could still be driving if it wasn’t for Rob making her stop. I do try to stick up for him and let her know it was all of us that wanted her to stop.

He said he doesn’t mind taking the heat for it at all.

How and when do we talk to our parents about giving up driving? There is no right answer.

“the long and winding road”

Since the process itself is so involved, these  transition  posts will come in  segments.

When I say it is a slow transition I am talking years!  Like I said mom and I  have been together for a long time and the subtle things I started noticing were the forgetfulness and repeating things.  But those are the things that happen to all of us as we age.

One of the most admirable traits that mom has is her ability to laugh at herself over anything… and over stupid mistakes or messing up a recipe or forgetting a birthday…. I always wished I was more like that.

One day I had come home from work and she said “oh I got lost today,” and she was giggling in that way that she does when she has done something (for lack of a better term) wrong.  So of course I said “lost, where, how?”  So she started to explain that she took a road that she had taken many times before as a short cut to get home from down town but it took her out to the main road.  She said she finally recognized where she was but  she could not figure out what went wrong.

First of all that road was not at all a shortcut to our house and we had not taken it….. really very often at all.  I actually tried to explain that to her and she insisted that she was right.

So this is a little scary, not just the getting lost part but the insisting that she was right part.  So now I am thinking,  how do I handle this situation?  What if she didn’t come out to a spot she recognized?  Do I try to explain to her again that she is mistaken?   So what did I do?  Well that day I ignored it!   Don’t get me wrong, I thought about it but I did not do much more than that. She did have a cell phone, so I figured if worse came to worse she could call me or the police if she had to.

That was 6  years ago.  Since then,  she no longer drives no longer has a cell phone.

So you might think this is about her driving but it is not,  because at the time I was actually thinking about her memory and not thinking too much about the driving.

My brother Rob, came to visit.

Oh dont get me wrong, repetition is great in some instances, I am a teacher I understand that we all can not remember things the first time around.  I think I’m fairly patient.  So I repeat things .

I also need to have many things repeated for me … OFTEN.  I forget names, numbers, dates, and it’s ok, we all do.

I have chickens and they are fun.  My mom grew up on a farm so she just loves to go out in the back yard and visit the chickens with me.  It is something we both enjoy and can share the joy of watching the chickens peck their way around the yard. 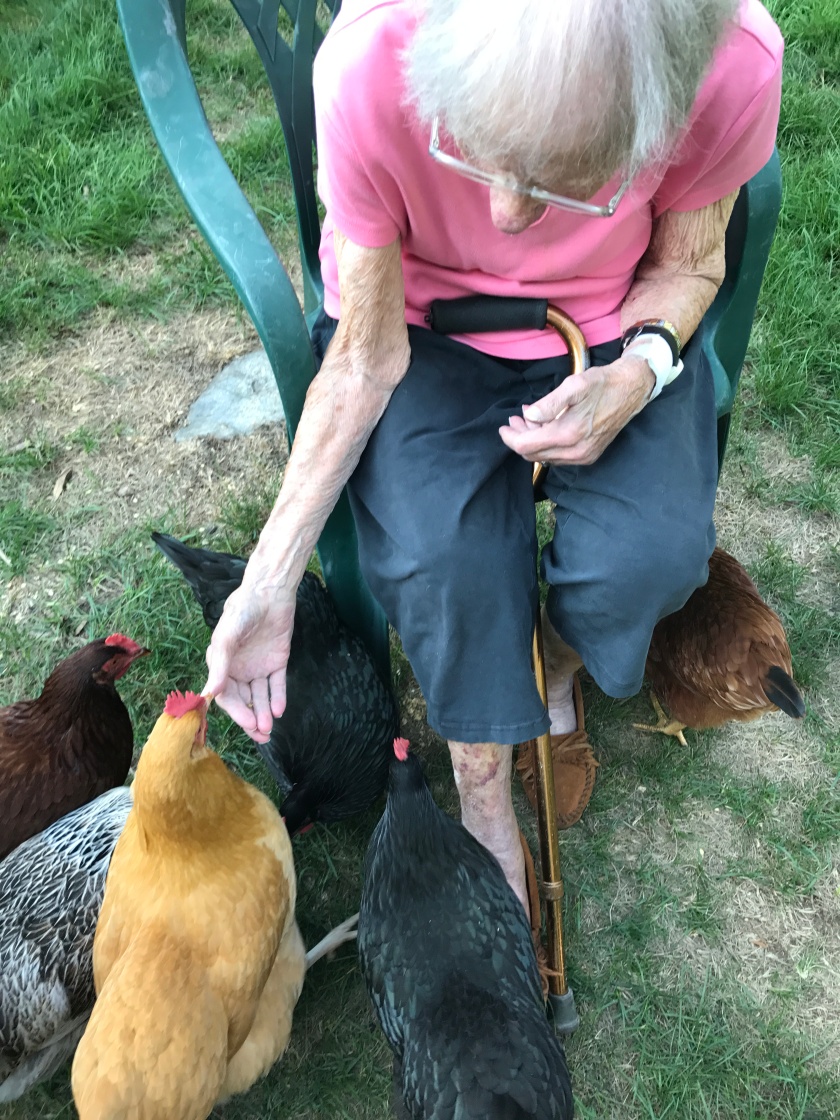 When we first let them out of the coop (this happens every time we go out there) Mom asks “ how many chickens are there?”  I tell her there are 9 and then she will ask “are they all girls?”  I will always say “yup all girls”!  In a half hour she will ask those 2 questions a ridiculous number of times.  Each time she asks I will  answer her as if it were the first.  RIGHT!!! I do try and for the most part I am probably fairly good about it.

You want  to know why I answer her as if it were the first time she has asked, because with Mom, it is all about the moments and they are fleeting.  She will be happy amongst the chickens and I, so if I have to repeat myself 1000 times so that she can enjoy another half hour with me then I will not hesitate.

Don’t  get me wrong , it can get frustrating,( and that is an understatement)  however, when  tomorrow comes and the same thing happens and the same conversation takes place I will patiently answer her the same way and we will both share another pleasant “moment” together.

When memory loss first begins it is far more frustrating, we want to fix it!  As the memory loss progresses you start to realize that for the individual that is going through it, it is more about how they feel and not about what they remember.  They do remember a feeling.

Sometimes I wonder how we got to this point in our lives. We all have moms , we all love our moms, except maybe a few odd situations, and as our moms get older we get very protective of them, we all do it. I’m no different.

Allow me to introduce myself, and of course my mom: my name is Deborah, call me that or Deb, but I have never been a fan of being called Debbie. My mom, Margaret Alice, born in 1928. She goes by the names, Margaret, Peg, Peggy , Aunt Peg, Mom,Momma, and Nana. We have a great relationship, really always have.

I’m 60 and my mom is 89, we live together and have for the first 18 years of my life and then when I turned 30, we started living under the same roof again…and still do. I honestly don’t want that to change,

It’s Saturday, I slept in a little this morning because I have a cold and Bob said he would get up with the dogs, since they don’t understand the difference between weekdays and weekends. Finally 7:15 I got up.

Mom got up a couple hours later, she sleeps a lot and she sleeps late when she can. I had her morning meds ready and made her coffee.

I never really know what to expect each day but no matter what happens I always try to stay positive 😁!